The Continental Connection flight was heading to the Buffalo Niagara International Airport when the pilots of the Bombardier Dash-8 aircraft failed to recover from a stall and the plane plunged into a home on Long Street.

Clarence residents were stunned by the crash, noting at the time that “it’s nothing you think would ever happen.”

All 49 people on board and one person inside the house were killed.

Inside the home, Karen Wielinski and her daughter, Jill, managed to escape. But Karen’s husband, Doug, died in the fiery crash.

“You know, I think I really wondered if I had died, too – I mean, I wasn’t even sure I was still alive,” said Wielinski, who now lives in East Aurora.

She remembered watching a news report and hearing “one on the ground” was killed. That phrase inspired Wielinski to write a book about the tragedy.

Some proceeds from her book, “One on the Ground,” go to a Flight 3407 scholarship. 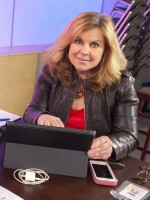 Eileen Buckley
Eileen Buckley is an award-winning radio news reporter who actually began her radio career as an intern at WBFO in 1984. In 2018, Eileen celebrates her 33rd year in broadcasting & media communications. She has worked at 10 radio stations in Buffalo and Albany, NY. Eileen has served as a former news director and assistant news director, managing the day-to-day news operations and assignment of news team. Now as senior reporter, she produces and reports in-depth features and spot news stories for broadcast during local segments of Morning Edition and All Things Considered. She has also provided National Public Radio with reports of stories of interest from the Buffalo Niagara region.
See stories by Eileen Buckley