Mrs. President, the opera, in Rochester

ShareTweetEmail
Listen
Listening...
/
Listen to the story of Mrs. President, including music from the opera and commentary from composer Victoria Bond 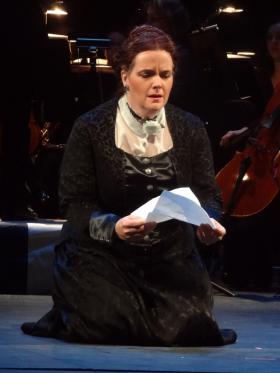 The opera Mrs. President is being performed Saturday night in Rochester. It tells the story of the first woman to run for president, which happened earlier than you might think.

In 1872, women couldn’t legally vote in America, but that didn't stop Victoria Woodhull from running for president that year. She’s a complicated, fascinating figure from American history, but not as well know these days as other women’s right activists of the late 19th century.

Composer and conductor Victoria Bond was drawn to Woodhull’s story.

“The first woman to have a seat on the NY Stock Exchange. She had a newspaper Woodhull and Claflin’s weekly. She came from a background of no money and no education, and that is one of the things I find so fascinating about her: she was so motivated and so driven.”

Victoria Woodhull is the subject of an opera, Mrs. President, written by composer Victoria Bond and librettist Hilary Bell.  Bond is in Rochester to conduct her opera this week, and talked about creating music for this fascinating historical figure.

“So many women in opera are victims. And you can really count on the fingers of one, maybe two hands, those opera characters who are not.  Carmen is one that springs to mind. Even though she does become a victim in the end. She’s a bad girl, and she’s the heroine of Carmen!  I have always loved of her character, because of her strength, and because of the freedom she has - She is not owned by any man.  I wanted to create something in music for Victoria Woodhull that had that kind of strength of character.”

And oh, the characters in this opera - ripped from the headlines of the 1870s. In addition to Victoria Woodhull, there is Henry Ward Beecher, a charismatic preacher who is helping to free slaves, and will also do anything to cover up the affairs with his parishioners.  He tangles with Woodhull, who threatens to expose his seductions in her newspaper – trying to blackmail him into supporting her presidential bid.

“She will do almost anything to get what she wants. And it’s not so much for her own personal power, but to be able to have a platform for what she believes is equality. She has this great vision, but she’s not unwilling to do some unsavory things to get there. It’s why she’s not a saint, and why she’s interesting as an operatic character.”

Election night 1872 finds Victoria Woodhull locked up in jail and denounced as “Mrs. Satan” in the press.

Susan B. Anthony, casting her famed illegal ballot that year, voted for Ulysses Grant and not Woodhull. Frederick Douglass, who was listed as Woodhull's candidate for vice president, also voted for Grant.

In the opera, Victoria Woodhull looks beyond all the setbacks, confident that a “thousand more will rise” to carry on what she has begun.

The opera Mrs. President by Victoria Bond is being performed at the Lyric Opera Theatre on East Avenue Saturday night at 7.

Click here to listen to an extended conversation with composer and conductor Victoria Bond about Mrs. President, how experiences as a Hollywood ghostwriter shaped her music, and more.