On Veterans Day, Americans are asked to take time to honor those, living and deceased, who answered the nation's call to arms when needed. Living in the Town of Tonawanda is a veteran who was among those involved in one of World War II's most famous battles.

Ted Drews, who turns 90 next February, celebrated his 19th birthday just two weeks before he and his fellow Marines left their position in Guam to become part of the third wave to land on Iwo Jima, a small but heavily fortified island that, upon its capture, gave U.S. forces a strategic point from where they could launch attacks directly on Japan. 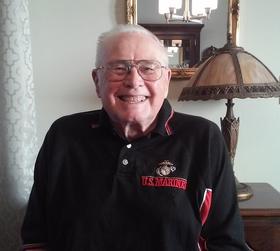 The Battle of Iwo Jima is one of the bloodiest conflicts in World War II's Pacific Theater. American deaths alone are estimated near 6,000. Drews' tasks included collecting them for burial.

"I had the misfortune of taking bodies to the cemetery," Drews said in an interview with WBFO in his home in late October. "When you get there and you see all these young lives that you realize are not going to return home, and raise families, buy a house, buy a car and have children... I still occasionally have a dream about it."

The experience affected Drews deeply. Many years later, he would have periods of depression. His son, who served in the Air Force during U.S. operations in Iraq, finally helped him realize he had been living with Post Traumatic Stress Disorder.

"The worst of these depressions would occur near his birthday, but his birthday was around the time of Iwo Jima," explained Phyllis Drews, Ted's wife. "And finally, Teddy (their son) said 'you know what this is? This is PTSD, Mom.' "

Drews is undergoing counseling and taking regular medication to help him with his PTSD. In the meantime, he's also pleading his case with the Veteran Administration in a battle of bureaucracy. He and his wife explained to WBFO that veterans are entitled to a 15 percent property tax rebate in the Town of Tonawanda, while combat veterans can enjoy a 25 percent rebate. He is not deemed a combat veteran.

He joked that some might think being in the third wave meant setting up a grill on the beaches of Iwo Jima and cooking hot dogs. But while he took his bureaucratic dispute with a laugh, his eyes welled with tears when asked about the takeaway he wants average Americans to have this Veterans Day.

He spoke for the Korean and Vietnam veterans, especially urging more respect and support for the latter.

"These fellas from Vietnam, they did what they were told," Drews said. "And these people condemned them for it. It shouldn't happen. If you haven't lived in their shoes, you shouldn't complain about them."

Days after WBFO's interview with Ted Drews, his brother Richard passed away. Richard Drews was also a veteran, in the Army, during the Korean War. According to his obituary in the Buffalo News, Richard Drews' funeral was private. His final resting place is in the Bath National Cemetery in Steuben County.