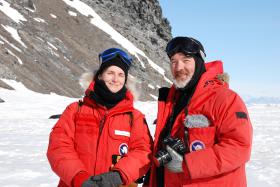 We’re following the adventures of composer Glenn McClure, who journeyed to Antarctica in late 2016. During an epic journey funded by the National Science Foundation, the SUNY Geneseo and Eastman professor lived in a tent on an ice shelf and worked with scientists to collect data. He is now using that data as inspiration for new music.

This is the first piece to emerge from my National Science Foundation Artists and Writers Fellowship in Antarctica. The piece features some key concepts from my experience of working a seismic team that is “listening” to the infragravity waves that travel from the rest of the planet and resonate with the Ross Ice Shelf. Through a variety of musical gestures, the piece attempts to imitate the waves that resonate through wind, water, ice, and (with our acceptance) into our body and soul. The “Shhh” effect has two meanings. 1. It provides an audio illustration of wave travel and 2. The sentiment that we need to be quiet to “listen” to the planet. 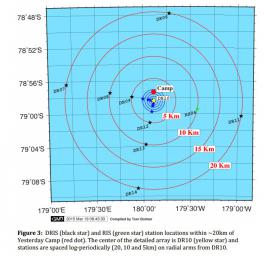 You may remember from my interview that my stuttering disability has played a central role in my music making. Stuttering silenced me, but music gave me a voice. That's why I seek the voices hidden in the silence of the ice. I am interested in exploring the connection between environmental awareness and disability.

Glenn recommends an episode of "Flying to the ends of the earth" focused on wheelchair-bound pilot who visits remote locations and has fascinating chats with people living close to the earth.

You can also hear the one of the composer's major works, The Emancipation Oratorio, performed in concert by the Rochester Oratorio Society on  February 16th.