Common Council calls for Paladino's ouster from school board

Council members voted unanimously on Tuesday to seek the removal of Carl Paladino from the Buffalo School Board by State Education Commissioner MaryEllen Elia. The move is mostly symbolic since the Council has little sway in the affairs of the Buffalo School District. 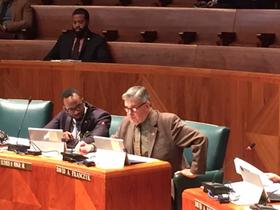 The Council wants the commissioner to investigate racial comments made to the alternative weekly Artvoice about President Obama and Michelle Obama and decide if they warrant removal.

"This cannot be tolerated any longer. Mr. Paladino: You have to go," said Reverend Mark Blue, the new local president of the NAACP, who attended Tuesday's session.

"My hope is that he will go and resign and not have to be put out. Cause, whenever you are put out it has a lasting effect. He is causing havoc with our state and with our city."

"The question is: Under the law in the state is there certain codes of conduct that would be injurious to fulfilling the mission of that organization, whether it's the Buffalo Municipal Housing Authority or the state courts as of today have upheld that Mr. Mascia had to be removed," Franczyk said.

"We don't know yet if Ms. Elia will deliberate that and if she will remove him. I believe she should remove him."

The school board meets Thursday afternoon in Council chambers to debate removing Paladino from the board.