Pit bulls have a bad rap. These advocates say it's a harmful myth about gentle, loving dogs

Dustin is a happy, lovable dog with an excellent sense of humor, but that wasn’t always the case. Not so long ago, he was found in a field — his leg mutilated, his spirit crushed.

He is one of the hundreds of dogs that rescue organization 716 Paws — a volunteer-run, Buffalo-based nonprofit with a Rochester chapter — places with foster families each year. Dustin was also among the handful of animals featured at this past Saturday’s pet adoption event held at PetSmart on Jefferson Road, an event that the rescue organizes each month.

But unlike many of the other pups up for adoption, the black doe-eyed pit mix has too often been passed up by those seeking their next furry family member. That’s because pit bulls — often referred to as “nanny dogs” due to their gentle spirit around children; “Petey” from The Little Rascals might come to mind — are notoriously given a bad rap.

And according to advocates, too many people believe it.

Dustin’s path to Rochester was a long one. When he was just a puppy, he was found with his brother hobbling in a field in Texas, each of them bleeding and missing a limb. It’s believed they were likely mutilated intentionally.

A nearby shelter brought them in and posted a video of the two, which is how Danielle McCall — co-founder of 716 Paws — learned about their dire situation.

“I sent a message to my partner and said, ‘I don't care what we gotta do, just get these dogs here,’” McCall says.

So with the help of a travel grant provided by PetCo, Dustin and his brother were flown to Rochester to be rehabilitated. Though his brother was adopted quickly, McCall surmises that Dustin has been overlooked because of his color — black dogs and cats are the hardest to adopt out — combined with him being what McCall lovingly refers to as “a tripod.”

But, although it may be off-putting to some, Dustin’s missing limb does not stop him from playing and running around, as any puppy would do. And though he was at first timid and tentative, the consistent care he’s been receiving has allowed him to blossom.

Contrary to popular belief, the term “pit bull” does not represent a specific dog breed; the American Kennel Club doesn’t even recognize pit bulls, for example. In most people’s minds, a pit bull-type dog is one with a certain “look” — such as those with large, block-shaped heads and very short coats. Arguably, they fit somewhere within the class of breeds called “bully breeds,” a generic term used to identify various terrier-type dogs.

To see how many of these marginalized pups need homes, look no further than the adoptable dogs at Rochester’s city shelter on Verona Street. There, you will find pit bull after pit bull, making up nearly the entirety of available dogs.

It’s the misconceptions about pitties that frequently lead to them being passed over in favor of more popular breeds. But pit bull enthusiasts will tell you that this makes no sense, maintaining that they are often gentle, loyal and friendly.

One of those self-described “die-hard pit bull-lovers” is Lisa Skavienski, owner of East Rochester’s DogEducated, a dog training and behavior consultation business. “They're smart; they're very fun to train,” she says.

Skavienski, who is also the human companion to pit bulls, has seen firsthand the stigma that often comes along with pits. “I've spent a good portion of my career trying to undo all of the misinformation that is out there about pit bulls,” she says. “There's no dog that's inherently aggressive or vicious.”

According to both Skavienski and McCall, pit bulls — like any other dog, regardless of breed — require training.

“Do you have a child and just say, ‘Have a nice life. We're not gonna do anything with you or teach you anything? No,” McCall says.

Aside from misperceptions about pit bulls themselves, there are also misunderstandings about breed discrimination laws. Such laws do exist — for example, those enacted in Ontario, Canada — but not in New York state. Here, municipalities cannot ban pit bulls or any other breed. And as of last year, neither can insurance companies for those seeking homeowners’ insurance.

As for Dustin, even though he’s still looking for a forever home, thanks to his loving foster family and rescue, he is indeed one of the lucky ones. Unlike so many other young, healthy, loveable dogs — many of whom wind up as little more than a statistic at the county shelter — he is being given training, exercise, and love.

716 Paws hosts their monthly animal adoption event at PetSmart on West Ridge Road in Rochester on the second Saturday of each month. For now, anyway, Dustin will be there.

CLARIFICATION: An earlier version of this story mistakenly reported that pit bulls were bred as "nanny dogs," a reference to a dog that is known to be good with and protect children. While the term is widely applied to pit bulls, the dogs were originally bred to harass bulls. The story has been modified accordingly. 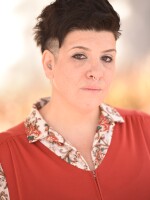 Jasmin Singer
Jasmin Singer (she/they) is WXXI's Weekend Edition host. She's also the author of "The VegNews Guide to Being a Fabulous Vegan" and "Always Too Much and Never Enough." She's the co-host of the "Our Hen House" podcast. After living in New York City for nearly 20 years, then trying out West Hollywood for size, Jasmin and her wife are climate refugees who found their way to Rochester.
See stories by Jasmin Singer