The 50th annual Ukrainian Festival gets underway today at St. Josaphat’s Church. It’s the first festival since Russia invaded Ukraine, and the first in-person celebration since the pandemic began.

He says with the ongoing war in Ukraine, there will likely be mixed emotions.

``For the non-Ukrainians that come, for them, I guess it could be a celebration,” of the country and its culture. But for expats, especially those with families in Ukraine, he says “It’s bittersweet.”

The annual festival does exactly that, with traditional music and dance, pierogies, cabbage rolls and borshch, and Ukrainian arts and crafts.

The local humanitarian organization ROCMaidan will have a booth at the festival to collect donations for victims of the war in Ukraine.

The festival is held at 940 Ridge Road East. Parking and admission are free. Events start Thursday, Aug. 18 at 6 p.m. and run through Sunday. 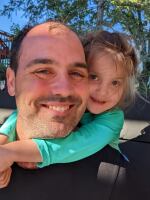 David Streever
David Streever is a journalist who has worked in public media since 2019, starting at WCVE-FM in Richmond, Va. before moving to Rochester, NY to work for WXXI. Before coming to public media, he reported for digital and print magazines after a tech career. When not working on the news, he bikes, cooks and spends time with his family.
See stories by David Streever