No injuries, but 65 residents displaced after fire rips through Perinton apartments

A three-alarm fire tore through the Pines of Perinton apartment complex in Fairport early Tuesday, displacing scores of residents and prompting a community-wide response involving town and school district officials, among others.

There were no deaths or injuries, according to the Fairport Fire Department, which led neighboring fire districts in the effort to suppress the blaze.

The Pines of Perinton is a sprawling, low-slung apartment complex on the corner of Route 250 and Whitney Road West that was built in 1976 and contains 508 units reserved for low-income residents.

Firefighters were sent to the complex around 3:30 a.m. and found the roof of one wing engulfed in flames and black smoke, Fairport Deputy Fire Chief John Overacker said. When the fire was under control more than five hours later, at 8:45 a.m., it was determined that 20 units had been rendered unlivable, at least temporarily, he said.

Six apartments were destroyed by the fire, he said. By afternoon, wrecking crews were on the scene razing those units.

Overacker said there were fire walls between the units, but that, in some cases, the fire walls did not hold.

Residents were evacuated, many of them having scurried from their units in nothing more than pajamas. Dozens without transportation were escorted to waiting Rochester Transit Service buses that had been dispatched to assist.

Many evacuees, including small children and elderly people, were taken to the Perinton Community Center at Town Hall. The town issued a statement around 9 a.m. saying it was sheltering about 65 people.

One of them was Shirley Hall, 68. Hours after she was evacuated, she was awaiting word as to whether her unit had been damaged. She described waking up to the odor of smoke and from her window seeing flames shooting from a string of nearby units across from hers.

“I never seen nothing like it,” she said. “The smoke was so black, like a tornado just whipping, and the fire was spreading across.”

Shirley Hall talks about the flames she saw from the Pines of Perinton as she evacuated from the fire that destroyed 18 units. @WXXINews @david_andreatta pic.twitter.com/MccZVW0UzU

By mid-morning, the community center had become a makeshift evacuee shelter. Dozens of people sat in community rooms, usually reserved for social activities, looking exhausted and waiting for news about their homes.

One woman, dressed in a bulky winter coat, sat in a chair in a hallway with a basket in her lap holding a newborn puppy she had rescued from the fire.

Doughnuts, coffee, and water were provided, and town officials said Wegmans and local eateries, including Mark’s Pizzeria, McArdle's, and Mulconry’s, had offered to send lunches. In the lobby, a table was set up offering clothing and diapers.

“My heart sank when I got the call this morning,” said Perinton Supervisor Ciaran Hanna, who, like others, was assessing the situation room by room and was in and out of meetings attempting to get a handle on the situation. “It was a difficult morning for them, and all we can do is make them as comfortable as possible.”

He described the community response as “outstanding,” noting that moments earlier, a town resident unaffected by the fire handed him an envelope containing $100 as a gesture of help.

Adults affected by the fire were pulled into private rooms to be interviewed by volunteers with the Red Cross, while children were ushered to the gymnasium to play games with town workers and read stories with personnel from the Fairport Public Library.

Fairport schools Superintendent Brett Provenzano said 310 children who live in the apartment complex attend public schools in Fairport, and roughly 40 of them were affected by the fire.

“This magnitude is quite devastating,” he said from the community center, where he was helping coordinate social, emotional, and academic supports for students.

“Our No. 1 responsibility is to make sure our kids and their families are connected and do our part to make sure they’re safe,” he said. “We’re in a mode of support-as-needed, making sure that we have our kids safe and resources available.”

In a nearby room, Eugene Sistrunk, 46, a Pines of Perinton resident, paced as he waited to be told whether he could go home. He described his apartment as being near the flames, but believed it was undamaged.

He was still wearing his black winter coat he had thrown on when firefighters and police banged on his door to tell him to get out and onto a waiting bus. He said he won’t forget what he saw as he left the grounds.

“The fire was like a high blaze on top of the building,” he said, “just burning up the apartments.” 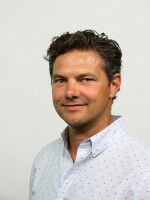