Throughout the region, residents paused Monday to remember the legacy of Dr. Martin Luther King Jr. and the civil rights movement.

The MLK Day 2020 Community Celebration at Kodak Hall at the Eastman Theatre focused on the women who helped make the movement possible.

Simeon Bannister is the chair of the commission that produced the event. He asked the crowd to take responsibility for Rochester by focusing on improving education and “crushing” poverty in the region.

“This is our opportunity to be inspired,” said Bannister. “To recognize that we have an obligation to take action. That there’s work for us to do. So I don’t want to hear lamenting and crying in December of this year if we haven’t done our work.”

Bannister also said that men should recognize their privilege and know when to step aside to let women lead.

Angela Sims of the Colgate Rochester Crozer Divinity School gave the keynote speech. She detailed the lives and trials of civil rights icons like Eleanor Holmes Norton, Marian Wright Edelman, and Rosa Parks. She said it’s important that young women know what these women went through.

“So many younger people don’t know the history of the civil rights movement, let alone the role that women played,” said Sims. “It’s the community’s responsibility, as much as it’s anyone else’s responsibility, to be able to think about the types of resources and responsibilities that we have in place where young people can actually express themselves and not feel as though they’re being judged.”

Sims said she hopes that community groups can continue to invest in mentoring young people, especially women. She suggested coming together to fund a trip for youths to join the trainings in Washington, D.C., for the 60th anniversary of the Student Nonviolent Coordinating Committee this April.

Rochester Mayor Lovely Warren and Monroe County Executive Adam Bello were among the dignitaries on hand for the annual event.

Warren said the women of the civil rights movement blazed trails that she has followed.

“Every person who put their hand to plow and said, 'I’m going to put my life on the line so that future generations can see the promise and realize the dream,' every last one of them meant the world to me and continue to mean the world to me and I am proud to stand on their shoulders,” said Warren.

Warren said the event’s focus on women of color is why she brought her 8-year-old daughter, Taylor, and her two mentees, Ne’ami Lewis, 14, and Jailin Figueroa, 14, there.

Figueroa said she heard the message loud and clear.

“Despite major setbacks that women of color had to go through, they still pushed forward and came out on top," she said. "So not feeding into the stereotypes you’re labeled with is really important because those can be major setbacks in your life, so just keep pushing forward.”

King's legacy was honored at other events Monday, including one at The Strong Museum of Play.

The YMCA of Greater Rochester and Paychex held an event in conjunction with the museum where students in YMCA programs participated in the "Fulfilling the Dream" art project.

James Brown
James Brown is a reporter with WXXI News. James previously spent a decade in marketing communications, while freelance writing for CITY Newspaper. While at CITY, his reporting focused primarily on arts and entertainment.
See stories by James Brown 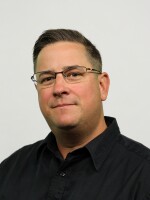 Max Schulte
Max Schulte is responsible for creating video and photo elements for WXXI News and its digital spaces. He also assists with news and public affairs coverage, digital-first video content, and studio productions.
See stories by Max Schulte
Check out all the virtual and in-person events on the CITY event calendar you can be a part of!
See all the events